If you want to come to our studios in Madrid and live the EBB experience for a few days, you can attend one of the next Workshops with our Guest Artists.
Limited places.
More information and reservations: ebbcompany@gmail.com

WHAT IS IT?
Two-day workshop with Jorge García Pérez in Elephant in the Black Box (Madrid)

SCHEDULE
In the Morning

WHAT IS IT?
Five-day workshop with Patrick Delcroix in Elephant in the Black Box (Madrid) 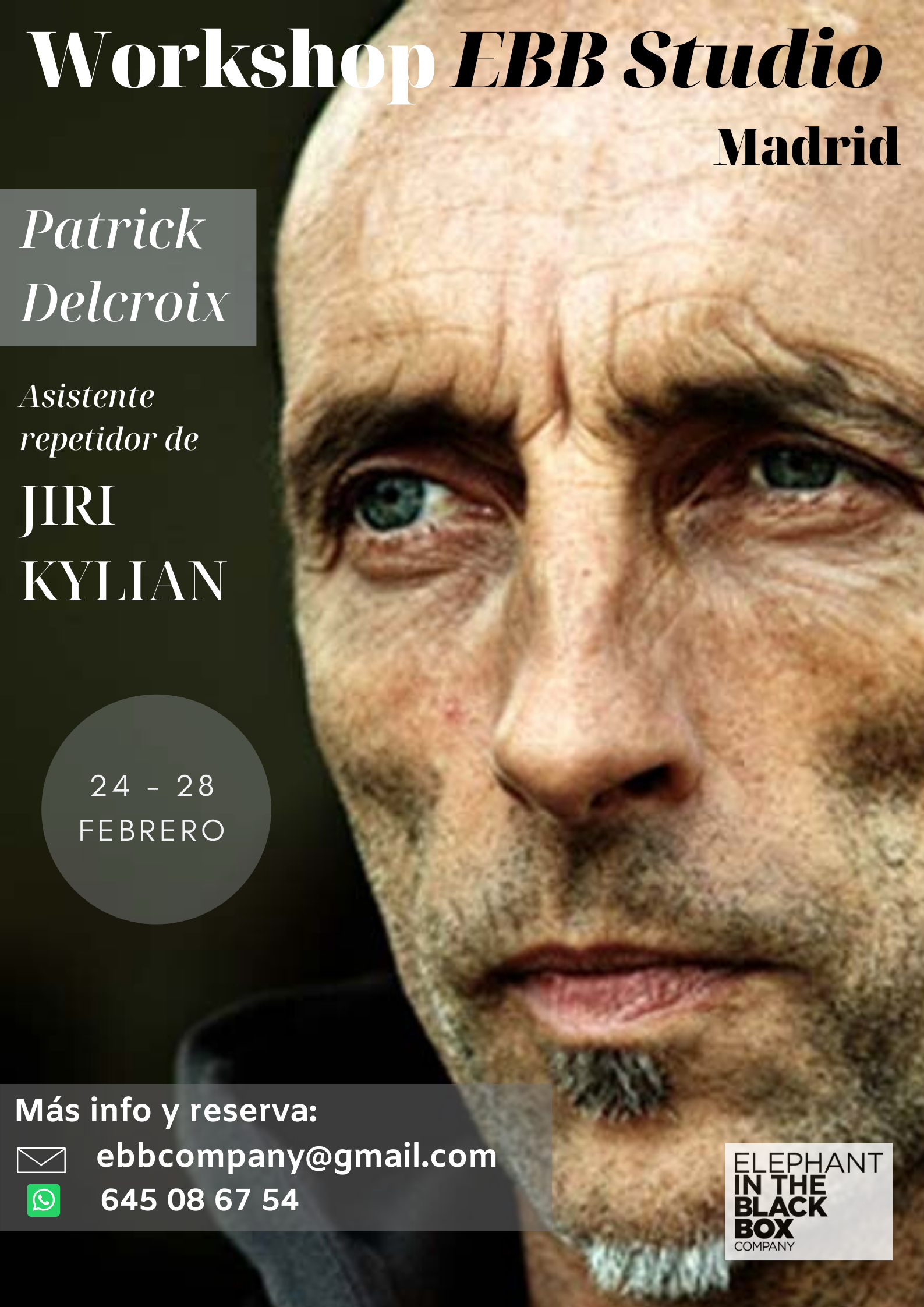 WHAT IS IT?
Five-day workshop with Dollie Henry in Elephant in the Black Box (Madrid) 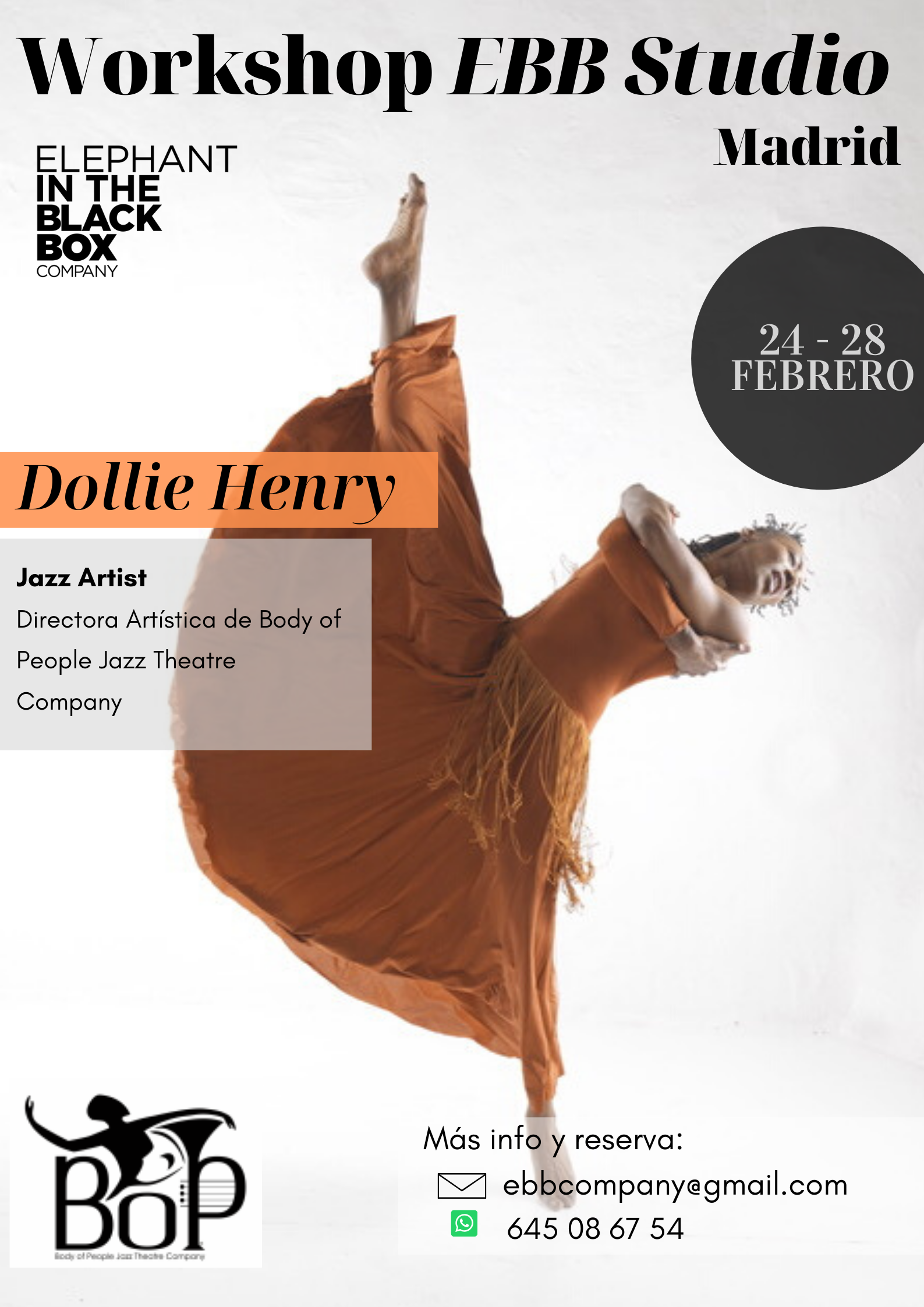 Dollie has led a respected career of over 30 years as a performer, choreographer, director, creative Jazz artist and educator and is recognised as one of the most formidable exponents of artistic and creative Jazz dance and theatre dance in Britain and internationally. She has shared her passion and philosophy of creative dance in every continent of the world, with a reputation that is widely revered and respected.

Dollie started dancing at the age of four and went on to professionally train at Laine Theatre Arts (UK) receiving her teaching qualifications with ISTD for Ballet, Modern and Tap, her LAMDA Drama Certificates (Bronze-Gold Medals) and was awarded ‘Most Outstanding Student’ in performance and choreography. At 17, she was invited to join The Olivier Briac Dance Company based in France as soloist dancer, later becoming resident choreographer and assistant director. Returning to England at 19, Dollie was invited by director & choreographer Dougie Squires to join his company The Second Generation for TV work in the U.K and Europe, numerous dance/musical productions and assistant to Mr. Squires.

As a Performer & Choreographer credits include:

For over 13 years, Dollie was director & choreographer for Paul Elliott of E &B Productions Ltd , (latterly Qdos Productions ) on over 15 pantomimes. She has also choreographed/staged for Opera and Ballet productions including, Cry of Innocence and C armen , the Northern Ballet Theatre on their National UK Tour of ‘ I Got Rhythm’ and with Artistic Director Stephen Jefferies (Hong Kong Ballet & Suzhou Ballet Companies China) on the Jazz Ballet ‘ Voyages’ As a co-producer , with music producer & composer Paul Jenkins and lyricist/writer/performer Ray Shell, Dollie co-created, directed and choreographed the orignal RnB musical W hite Folks – A Musical Fable , with successful productions at Nottingham Playhouse,The Cochrane Theatre, The Tricycle Theatre and the off West End, Pleasance Theatre (UK) In 1996, Dollie put her true artistic and creative passion into evidence and founded her own Jazz Dance & Music Theatre Company B ody of People aka BOP . In partnership with Composer and Jazz musician P aul Jenkins , the company, now in it’s 22nd year, has created and produced an array of productions and dance concerts that have been performed both in the UK and internationally. A selection of BOP productions include: T ouches of Miles • Sacred Space • Trumpet Trilogy • Dizzy Heights • Duke’s Place • A Journey of Jazz • Up Close and Personal . BOP’s more recent production Miles Ahead – A double-bill program featuring new company works with F ootprints in Jazz and their inaugural Jazz theatre production T ouches of Miles , was presented at the off West End, Cochrane Theatre and subsequent UK tour supported by the Arts Council of England. Through the company’s international recognition, Dollies’ creative and commissioned works have been performed at dance and theatre venues worldwide. In 2012 BOP became artistic Company-in-Residence at Morley College London.

As part of her ongoing Educational Philosophy:
Dollie has initiated T he BOP Jazz Dance Education Programs ‘Jazz Dance for Life’ in the UK, Europe and The Caribbean and over the last 20 years has presented her ever popular Jazz Dance Residencies, workshops, mentoring programs and masterclasses at dance venues throughout the U K & Ireland, Africa, The Caribbean, Austria, Croatia, China, Poland, Germany, Israel, Serbia, Slovenia, South Africa, Spain, Sweden and USA. Dollie has achieved creative commissions from the S tate of Lithuania (The Baltic States), as the first international jazz artist to be invited by the State to present lectures/workshop and devise a jazz program and performance projects for the K laipeda Music Theatre , alongside Jazz commissions with the A ustrian Youth Ballet, Graz Austria, Rytmix Dance in Konin, Poland and Kielce Dance Theatre Company, Poland and most recently at the Jazz Arts Festival 2018 at W ellington College in Shanghai, China.

As an experienced dance and theatre practitioner, Ms. Henry is instrumental in mentoring the careers of many dancers now performing in established dance companies, musical theatre and concert dance shows all over the world and continues to mentor the next generation of Jazz dancers and professionals performers, through the outreach of BOP Company. Aside of all her comittments, Dollie is currently in the process of writing a Jazz Dance Book commissioned and to be published by C rowood Press . The book will offer a practical guide and insight in to the lineage and practice of Jazz dance art form.

Dollie Henry epitomizes all it is to be a consummate, all-encompassing creative dance and theatre artist. A fusion of expertise and genuine expression of creative spirit allows this Lady to sustain her position as the catalyst for the Jazz dance art form and legacy in the UK & Europe, enabling her to share her passion and creativity all over the world .

WHAT IS IT?
Four-day workshop with Marie-Pierre Genovese in Elephant in the Black Box (Madrid)

WHAT IS IT?
Five-day workshop with Davide Di Pretoro in Elephant in the Black Box (Madrid)

SCHEDULE
In the Morning 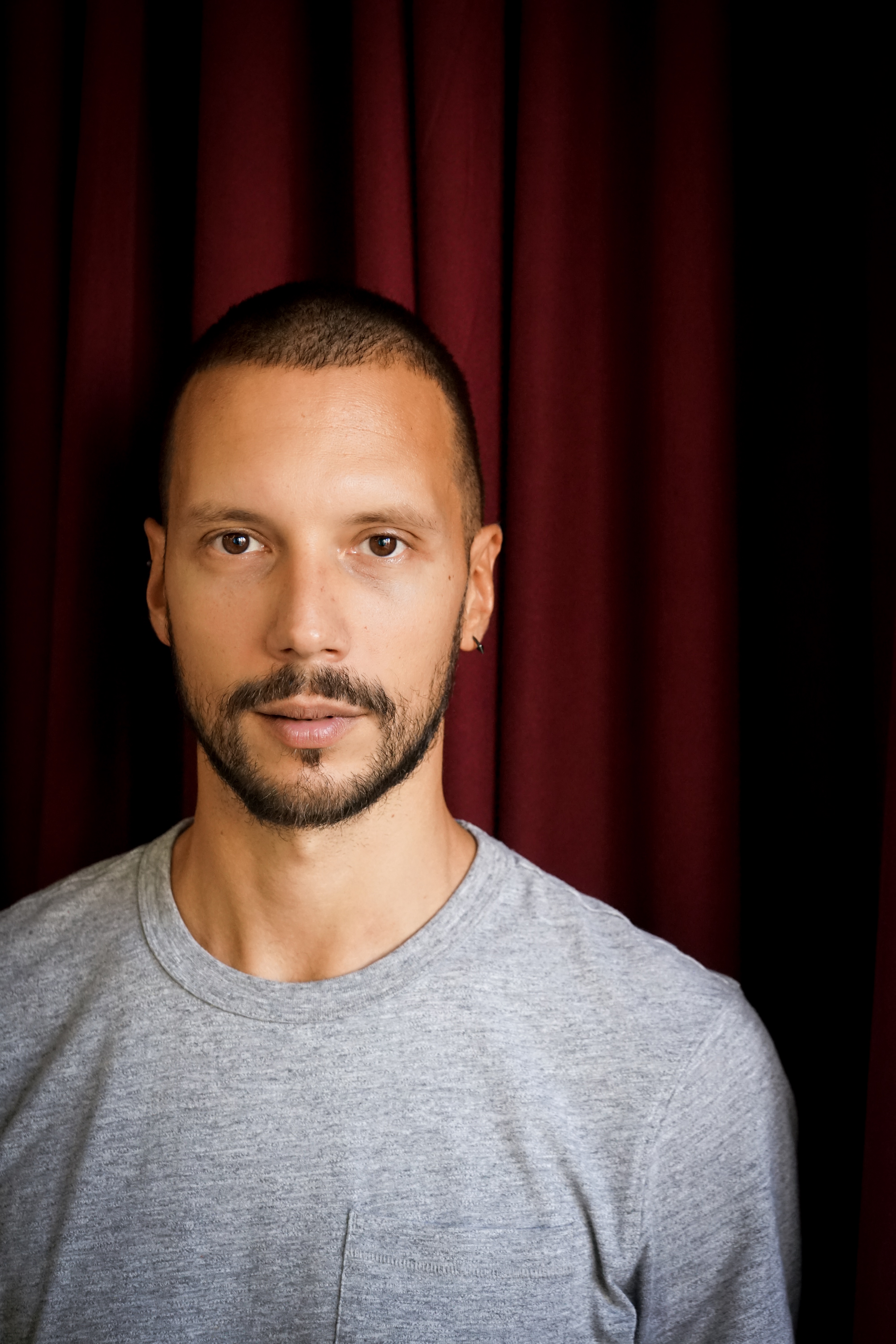 WHAT IS IT?
Five-day workshop with Sharon Fridman and Nathanaël Marie in Elephant in the Black Box (Madrid) 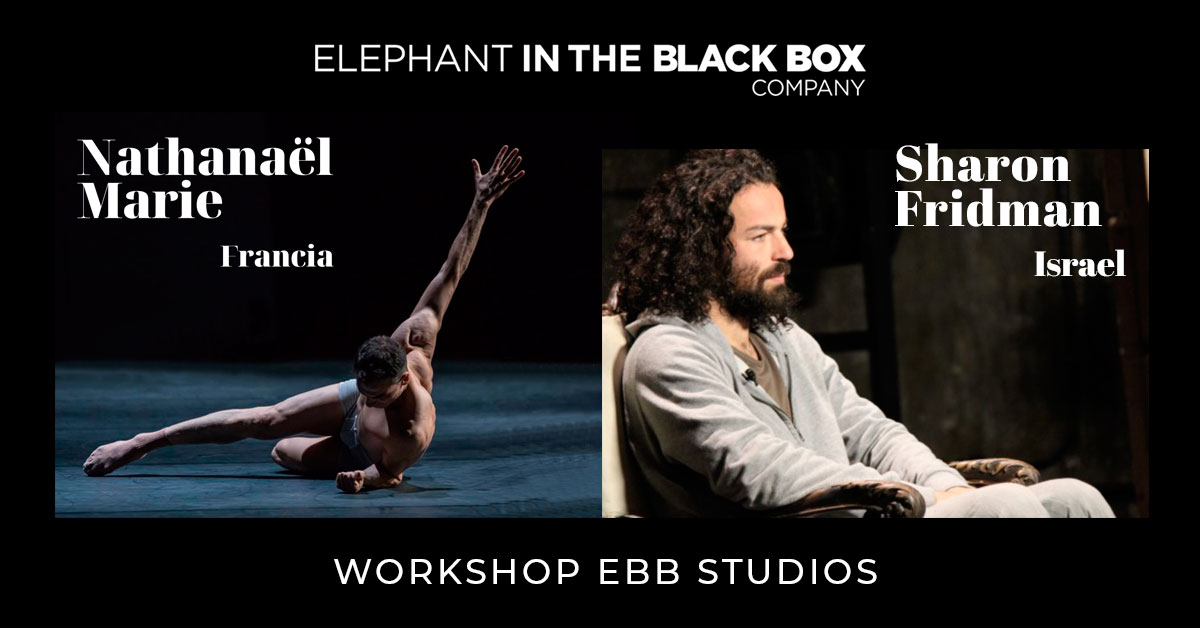 He began his career as a dancer at Ido Tadmor Dance Company in Tel Aviv, continued with Kibbutz Contemporart Dance Company, the Vertigo company and with several projects with Suzanne Dellal Center. He debuted as a choreographer with “Covered Red” (2000) and “Anna” (2001). He was artistic director of the Mayumaná company between 2004 and 2008. In 2006 he moved to Spain and created the company with his same name. In 2008 he participated in a project promoted by the Royal Opera House in London to support young choreographers, under the artistic direction of Wayne McGregor. At this time he began his international career. Some of his works are “All Ways” (2016), “Free Fall” (2014) or “Rizoma” (2012). In 2015 he received a Max Award with “Free Fall”. He has won numerous awards at events such as the Burgos-New York Choreographic Contest, the Hannover International Choreography Contest, the Choreographic Contest of Madrid or the International Theater and Dance Fair of Huesca. His work is based on three fundamental pillars: the language of contact, the social dimension of dance and the breaking of the fourth wall, seeking to connect more with the public, incorporating it into the piece and making dance a personal experience also for the viewer. Major international dance companies, such as the National Ballet of Paraguay, LaMov Dance Company (Spain), Vertigo Dance Company (Israel), Compagnie Jus de la Vie (Sweden), Theater Bielefeld (Germany) or the National Dance Company (Spain) they have in their repertoire creations of Sharon Fridman.

Dancer and international choreographer since 2000, at the age of 39 Nathanaël has worked for 18 years in dance companies such as the Ballet of the Grand Theater of Geneva, the National Ballet of Marseille and many others. During his career, he develops his vision of body movement and weight in different angles: martial arts, street dance, ballet and contemporary dance bring him diversity in movement expression research and spirituality. He has choreographed for French festivals and ballet companies and holds master classes in different cities such as Santa Barbara, Cape Town, Rio de Janeiro, New York, Begin, Bangkok, Makao, Geneva, Barcelona or Cannes.